Manchego cheese is one of the most well-known Spanish cheeses in the whole world, and it is protected by an European Designation of Origin (PDO).

It is made exclusively from Manchega sheep´s milk, to guarantee its quality.

About the native country of the Manchego Cheese

The homeland of the Manchego cheese, “la Mancha”, is a natural and historical region located on a plain, arid, dry, but fertile, elevated plateau (610 m or 2000 ft.) of central Spain, south of Madrid, stretching between the Montes de Toledo and the western spurs of the Serranía de Cuenca. 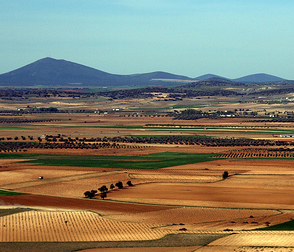 The name of this region is probably derived from the Arab word “al-mansha”, meaning «the dry land» or «wilderness». In Spanish the word “mancha” literally means spot, stain, or patch, but this expression and the name of the region are generally accepted as being unrelated. Nevertheless his climate is cold semi-arid with strong fluctuations. Farming (wheat, barley, oats, wine grapes, olives) and cattle raising are the primary economic activities, but it is severely restricted by the harsh environmental conditions. So viniculture is important in Tomelloso, Socuéllamos, Valdepeñas and Manzanares, in Ciudad Real and Villarrobledo in Albacete. Olive cultivation can be found mainly in the old territories of the military Orders of Santiago, San Juan and Calatrava. Other crops include cereals (hence the famous windmills) and saffron. Sheep are raised and bred, providing the famous Manchego cheese, as are goats, providing a just as delicious cheese. Vegajardin offers you all the delicious products of this literary known region of Don Quixote.

How to spot a fake Manchego cheese?

The D.O. Regulating Council is in charge of managing the production and distribution of this type of cheese. That means, that not all cheeses can be considered “Manchegos”. For a cheese to be considered Manchego, it must meet a series of requirements that respect its Designation of Origin.

This is the official label:

This label must contain the logo of the D.O. Regulating Council, and must be numbered and serialized, thus ensuring that the cheese has passed the appropriate quality controls.

If you don´t see this label, don´t buy it!

Even if you buy a wedge of Manchego cheese, it must have the corresponding label. In this case, the label will contain a green stripe in the upper right corner, indicating that it is a wedge.

Another distinctive sign to identify an authentic Manchego cheese is its casein plate.

In the center of each cheese, a casein plate will be displayed, where you can see the word “Manchego”. This plate contains a number that is like the ID of the cheese, so you can be sure that it is a Manchego cheese.

In addition, this plate has been modified recently. Maybe until now, you were used to see this casein plate on Manchego cheese: 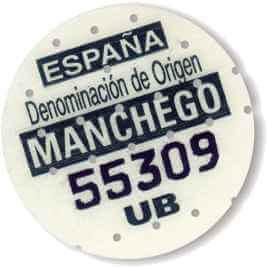 That was the old plate, which has been used since 1.985, when the Designation of Origin was granted to this Spanish cheese. But recently, its design has been changed and now, this casein plate is a circular crown, which reinforces the identity of Manchego cheese. 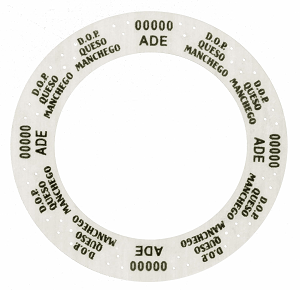 This way, any portion of cheese will be identified with this badge, so that it is easier to know its traceability.

Moreover, if the cheese is made with raw milk, the word “artisan” or “artisanal” may appear.

Another way to recognize Manchego cheese is by its appearance.

This variety of cheese has a hard, straw-coloured or greenish-blackish rind, and its engraving in zigzag shape on the rind is reminiscent of esparto grass. The interior is of an ivory-white or pale yellow colour and is firm and compact with small eyes that are unevenly spread.

In its commercial label, it must be clearly specified, that the cheese has been manufactured entirely with milk from Manchega sheep.

And the last way to recognize a Manchego cheese is through its provenience. Manchego cheese can not be manufactured in all of Castilla la Mancha, it can only be produced in the territories covered by the Designation of Origin, which cover part of the provinces of Albacete, Ciudad Real, Cuenca and Toledo.

Manchego cheese is not just a type of cheese. As long as the cheese is manufactured according to the rules of the D.O. Regulating Council, several types of cheeses can be obtained depending on the ripening period or the type of milk from which is made.

According to the ripening period, Manchego cheese can be:

Although Manchego cheese must be made exclusively with Manchega sheep´s milk, the milk treatment may vary depending on the manufacturer.

If it is a Manchego cheese made from raw milk, it is also called “artisan”. As a general rule, all raw milk cheeses retain the original flavour better, while pasteurized milk cheeses will have a slightly different taste due to that pasteurization process to which milk is subjected.

How does Manchego cheese taste?

Manchego cheese is a very tasty cheese, whose flavour varies according to the ripening period. Its delicious flavour becomes more spicy as its ripening period increases.

It has a compact texture but at the same time is buttery, and its flavour reminds of Brazil nuts and burnt caramel, with a slightly salty, very pleasant aftertaste. Its aroma is lactic and more persistent the more cured the cheese is. This aroma is reminiscent of lanolin and roast lamb.

How to serve Manchego cheese?

Manchego cheese is an exceptional delicacy that you can use as an appetizer to delight your guests, or to introduce it in many other recipes. It can be served on a cheese board, with salads, as tapas or accompanied by quince paste or nuts. The Viejo type (cure period 12 months +) can be grated, cut into cubes, covered in whipped egg and breadcrumbs and then deep fried.

But to be able to fully enjoy a good Manchego cheese, you have to take into account several things:

1 Serve it at room temperature

Remove the cheese from the refrigerator at least half an hour before consuming it so that iy is tempered and you can appreciate all its nuances. If it is cold, the flavour of the cheese is much less complete.

When you have finished consuming it, you must store it correctly so that the cheese does not dry out or loose properties.

The best way to do it is to store it in a closed container so that it does not crack. Also, you can wrap it in transparent film and keep it in the bottom of the fridge, near the area of fruits and vegetables.

If you put the wedges of cheese in hermetic containers, you will achieve a more lasting preservation.

Tip: Store Manchego cheese in an hermetic container with a piece of dry bread. The bread will absorb moisture protecting the cheese from mold growth or excessive drying. Just remember to change the bread when it is coated with mold.

If what you want to keep is a piece of whole cheese, it is advisable to turn the cheese over every 8-10 days for optimal conservation.

Manchego cheese is a very versatile cheese that combines great with dozens of foods. It can be served on a cheese board, with salads, or as a tapa.

A very simple combination is to accompany it with bread. You can use a conventional bread, or you can give it a more original touch and use dried fruit cakes, which combine great and enhance the flavour of the cheese.

You can also look for contrasts with other sweeter foods, such as quince paste, jams, fruits… The more ripened Manchego cheese is, the more contrast there will be with the sweet notes of these foods.

The Viejo type (cure period 12 months +) can be grated, cut into cubes, covered in whipped egg and breadcrumbs and then deep fried.

And if you want to make an exquisite combination, you can combine the Manchego cheese with a good Spanish wine. Depending on the ripening of the cheese, we could choose a wine with more body or smoother.

If we have an aged Manchego cheese, a red wine or a “Gran Reserva” with more powerful aroma and flavour, will be a good choice. While if we have a softer Manchego semicured cheese, a better choice would be a less intense or even fruity wine. Actually, any wine is an excellent accompaniment for a Manchego cheese.